Do You Qualify for Workers' Comp? 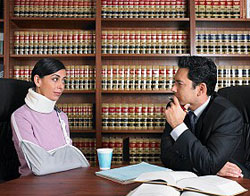 Every employer in The United States is required by law to carry workers’ compensation insurance and employees have specific rights under the law regarding work related injuries and illnesses. Any worker injured on their employer’s property, whether in the performance of their regular job duties or not, is eligible to file a workers’ compensation claim.

It is important however to understand that your right to file a claim is not the same as being eligible to receive workers’ comp benefits. There is a review process involved with any claim and the determination made following that review is what will decide if you qualify for workers’ comp.

Who Is Eligible for Workers’ Compensation?

You might think that everyone who has a job and is working is covered by workers’ compensation. However, that is not the case.

Employers are only required to carry worker’s compensation insurance if the business fits criteria set by the Federal government. That being said, most workers are covered by workers’ compensation which will pay for their medical expenses and other costs if they get hurt while working.

If you meet these criteria, and you have been injured on the job, you can file a claim for workers’ compensation.

How Do I Qualify For Workers' Compensation?

Qualifying for workers' comp is dependent on several factors, including:

Many workers fail to report an on the job injury in a timely manner, thereby negating their eligibility to receive workers’ comp for the injury. Many also fail to report an injury for fear of reprisal from their employer, particularly when the injury is the fault of the employee.

Not reporting a work related injury within the timeframe established by your state workers’ compensation laws will disqualify any claim you file in the future. Even if an injury does not seem that bad initially, your condition may worsen over time; however, if you did not report the incident when it happened, you may not qualify for workers’ comp later on down the road, especially if enough time has passed that your employer and the workers’ comp insurance provider cannot clearly link your condition to a specific incident on the employer’s premises.

The time period for reporting varies from state to state, but as a general rule, reporting an injury immediately after it occurs is advisable. As soon as you can notify your employer, do so. The lack of delay in reporting can increase your chances of qualifying for workers comp.

What Injuries Are Covered by Workers’ Compensation?

Many workers don’t realize that the kinds of injuries covered by workers comp are quite varied and lengthy. It is not just injuries from the performance of your regular job duties that qualify under workers’ compensation insurance plans. Any injury which results from an on the job accident or incident can be covered by workers comp, no matter how the injury happened, whose fault it was, or where on your employer’s property the incident occurred. Even if you slip and fall on the stairs, the resulting injuries could qualify under workers comp, as the accident occurred on your employer’s property.

Likewise, there are injuries which occur not as the result of an isolated incident, but rather due to repetitive activity performed on the job. Injuries resulting from these kinds of activities are considered “repetitive stress” injuries and may qualify under workers comp as well.

Illnesses may also be covered by workers’ compensation, provided they’re due to on the job exposure of some kind. Occupational diseases fall under workers’ comp coverage and are chronic conditions that result from workplace activities. These conditions are typically well established, having been documented in a number of workers over the course of many years, showing that the disease occurs at higher rates in workers within a particular job or industry than within the general population.

In the case of an established or recognized occupational illness, under workers comp laws, the burden of proof falls to the employer or the insurance carrier. In other words, if you suffer from a well recognized condition that is associated with your particular job, you will qualify for workers comp, unless your employer or workers’ comp insurance provider can show that your illness is caused by something which is not work related.

There are specific occupations which are not covered by state-level workers’ comp laws. These are considered “excluded occupations” and often fall under specific federal labor laws rather than state statutes. Examples include but are not limited to railroad workers, coal miners, nuclear energy workers, longshoreman, dock workers and others who work at sea or near a navigable waterway. If you work in one of the excluded occupations, consulting an attorney can also help you understand your rights and responsibilities under workers’ comp and may increase the likelihood that you’ll qualify for workers’ comp benefits.

We currently accept workers compensation cases in the following states: